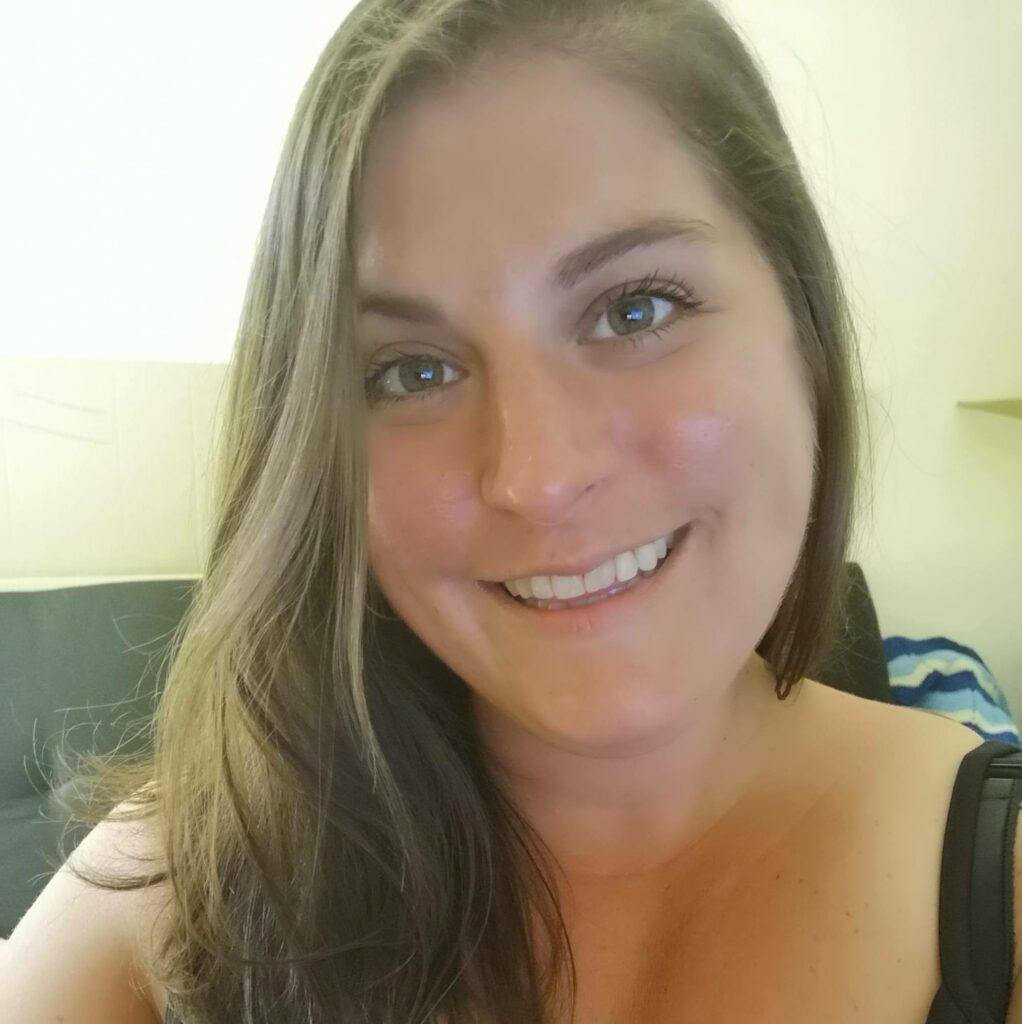 My name is Heather Talpa and I am a 34-year-old woman living in London, Ontario.

My first HS bump appeared on my inner thigh when I was 17. It did not really alarm me. I thought it might be an ingrown hair or pimple. But it didn’t go away, and it was painful. I went to my family doctor and he prescribed me a topical cream for it, but no official diagnosis of any sort.  The cream did not work and the boil persisted.

As the years progressed and I went away to school, it got worse… but very slowly. It took 5 years for my HS to go from stage 1 to stage 2. Around this time, I started looking up my symptoms on Google and saw many results for a skin condition called ‘Hidradenitis Suppurativa’. I unofficially ‘Google’ diagnosed myself around the age of 22.

I was not officially diagnosed until I had seen a new GP after moving to London. She was the first medical professional to formally diagnose me with HS, and I was 26. At that point, I was teetering somewhere between stage 2 and stage 3. She told me there was no cure and to see a dietitian to lose weight. She offered me no other solutions, treatment options, or words of hope. I left her office feeling very defeated. I felt so much shame about it that I did not seek medical attention again for another five years because I thought it was my fault I had it since I was overweight. Obesity is the only associated HS comorbidity that I have. Needless to say, I found a new family doctor.

It then took another three years for my stage 2 to progress into severe stage 3.  It became what my gynaecologist later described as “the most horrific case she had ever seen”. It had reached the point of Stage 3 where it had diseased and deformed most of the skin on my entire groin so badly (inner thighs, pubic bone, labia, buttocks, etc.) that I could no longer ignore it and had to try  to once again seek help from a medical professional. I carried a soft cushion around with me everywhere I went as I developed a fear of sitting on hard surfaces.  The reality of living with chronic pain every day was taking its toll on me. It was now affecting my mental health as well as my ability to walk and sit down.

The area of my life the HS affected the most other than the physical part, was my mental and emotional health. I was in so much pain that I would just pray it away. In 2015, I embarked on an inner journey that aimed to shed a light beyond just the physical aspect of the disease. I knew I did not deserve to be in pain. I thought I was a good person. On my darkest days where hope was a mere glimmer in the vast and distant sky… I had nowhere else to go but inside of myself for comfort.

I have always found writing to be very therapeutic and for that reason, I am drawn to it. It helped me to make sense of the many deep-rooted emotions I was feeling about HS. I wrote a book about my inner journey while I was going through it. I escaped so far into my mind that I landed in the psych ward, and was diagnosed with psychosis.

Finally in early 2016, a few months after my mental health diagnosis, I made an appointment with a Dermatologist who was non-judgmental and quite familiar with the disease. I was 29-years-old. She let me know that she thought my only treatment option was wide excision surgery. She referred me to a General Surgeon who agreed to operate on a large, chronic cluster of lesions on my left breast in May of 2016. He also agreed to do some of my groin but once I was on the operating table, he said he would only do my breast area as he wouldn’t know where to start and where to stop with the groin lesions. He assured me he would not forget about me and that he knew a Plastic Surgeon who could help me with my groin. About one year later, and after sending a 2nd referral to the same sought after Plastic Surgeon, this time by my family doctor, I was finally able to book a consultation with him.  When I met with the Plastic Surgeon, I found him to be a very compassionate, caring and experienced surgeon. It seemed like he knew what he had to do. I didn’t know at the time, but I was extremely lucky to have fallen into his care.

Something you might not know about HS surgeries in Canada is that although the surgery itself may be covered by most provincial healthcare plans, the surgeons do not make a lot of money performing HS-related surgeries compared to other surgeries they do. This means there is not a lot of motivation for surgeons to do these surgeries because there is not much in it for them. A surgeon basically needs to agree to do the surgery for the bare minimum and therefore their motivation for performing surgeries on HS patients must come from a deeper yearning to help the patient and improve the patient’s quality of life.

My surgeon saw immediately that I was a young women (30 by the time I first met with him) with my entire life ahead of me. I was too self-conscious to take dating seriously and could barely function with my daily activities – even getting dressed for work every morning took every ounce of strength and energy I had because it hurt to move. My surgeon understood this and he agreed to take on all of my surgeries from that point on. We started with a six- inch lesion on my sitting bone in Summer 2018. The following summer of 2019, he excised my left armpit (including removing my sweat glands and hair follicles so the HS would never return in that area). In December 2019, we went through with my major groin reconstruction surgery and it was the hardest time of my life.

During my 6 week hospital stay, I had 30-40 different nurses who saw my wound and asked me what happened. I explained to each and every person who asked about it what HS was and how it had destroyed that part of my body. I would estimate that about 80% of the nurses who saw me had never heard of HS before. I was very happy to spread awareness about the disease, and it felt like my duty and purpose to do so, being in this situation. Many of them would tell me they were so intrigued by it that they took the time to read my entire patient file and even research HS.

Finally, in June 2020, my right armpit was excised as well, with the sweat glands and hair follicles removed to match my left arm..

It took me years to open up to family and friends about the disease. My mom was the first, and only non-medical professional I had told about it for many years. I had friends from when I was 17 who did not know I even had a skin condition until I opened up to them about it around the age of 30.  I started telling my co-workers around the same time. Once I had told everyone in my life who I was close to, it felt like an actual weight had been lifted from me. I did not feel any judgment or shame. They were there for me with flowers and lovely messages and cheerful visits. My friends and family became my lifeboats on my stormiest days when I felt like sinking.

My top “Hero”who has been there for me is my mom. She was with me every step of the way, every appointment, surgery, or hospital stay. She held my hand and let me cry, and her presence in itself was soothing to me. When I was recovering from my groin surgery, she was my personal nurse once I was back home, and she was there whenever I needed her. Even though I was given a rocky path in this life, I was still blessed with so many wonderful, kind people around me, rallying for me.

If I could say just one thing to anyone struggling with the heavy burden of bearing this disease, it would be this: Please do not be ashamed of having HS or scared to discuss it with medical professionals, and the family and friends in your life. Do not feel ashamed to ask people for emotional support. Once I opened up, I received an immense outpouring of love. Also, the more you can do to spread awareness about HS, the better! If we do not tell our stories, then we cannot be heard or helped.

We are beautiful humans with Warrior wounds that we did not ask for, and together, it is our mission to spread awareness and knowledge so that those suffering have a better chance of coming across compassionate people who will make it a commitment to help them through it. You do not have to go through this alone. But it starts with you and your voice.